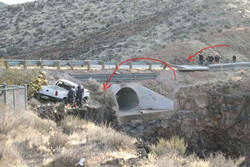 Say, for example, your vehicle is sliding off the road and headed for a culvert. Avoiding the edge of the culvert will keep your vehicle from tripping and rolling over. To do so you have to impact a fence or some bushes. You would probably do better to hit those objects than the culvert.

Regaining control of a vehicle in an emergency can be a stressful event, and many drivers find themselves in this situation at some point in their driving career. Fortunately, there are a few strategies drivers can use to help regain control of their vehicle in an emergency, such as the Paths of Least Resistance technique. This technique involves recognizing the available paths of least resistance, or the paths that offer the least amount of resistance to the vehicle, and using them to regain control of the vehicle.

When a driver finds themselves in an emergency situation, it is important to remain calm and assess the situation. This means taking a few seconds to look around at the environment and identify any possible paths of least resistance. These paths are typically roads, lanes, or areas of the road that are not blocked off by other vehicles, objects, or debris. By recognizing these paths and using them, the driver can regain control of their vehicle and avoid a potential accident.

When trying to regain control of a vehicle in an emergency, it is important to stay focused on the task at hand and not get distracted. This means avoiding distractions such as other drivers, loud music, or personal conversations. Instead, concentrate on the path of least resistance and use it to move the vehicle in a safe manner.

The paths of least resistance can also be used to avoid obstacles that are in the way of the vehicle. For example, if there is a large pothole in the road, the driver can use a path of least resistance to drive around it. This will help the driver avoid potentially damaging their vehicle and getting into an accident.

Finally, it is important for drivers to stay aware of their surroundings at all times. This means being aware of potential hazards and being prepared to take evasive action if necessary. Drivers should also be aware of the location of the brake and accelerator pedals in the vehicle and be prepared to use them if needed.

Using the Paths of Least Resistance technique to regain control of a vehicle in an emergency can help drivers avoid accidents, save time, and remain safe on the road. By recognizing the available paths of least resistance and using them to regain control of the vehicle, drivers can stay safe and avoid potential disasters.

More About Path of Least Resistance