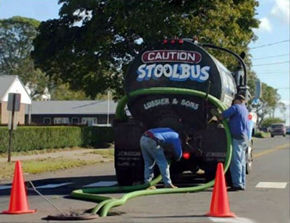 According to the U.S. Department of Motor Vehicles, "When driving on the highway you are at a serious disadvantage if involved in a crash with a larger vehicle. In crashes involving large trucks, the occupants of a car, usually the driver, sustain 78 percent of fatalities."

Motorists need to be familiar with large trucks ability to maneuver and brake. A large truck takes longer to stop than a car traveling at the same speed. Trucks can weigh up to 80,000 pounds and when traveling at 50 mph can take more than 400 feet to stop.

Trucks also appear to be traveling slower than cars due to their larger size. Many collisions occur where a driver doesn't realize how fast the truck is driving.

Cutting in front of a truck may force a trucker to suddenly slow down, turn or stop. Trucks take much longer to stop in comparison to cars.

Sharing the road with larger vehicles can be dangerous if you are not aware of their limitations.

Interacting with trucks can be a daunting task, especially if you’re not used to driving something much bigger than your own car. But with the right knowledge and preparation, you can safely and confidently interact with trucks and share the road with them.

First, it’s important to understand that trucks are large, heavy vehicles that handle differently than cars. They are slower to start, stop, and turn, so you should give them plenty of room when passing or merging. You should also be aware of the truck’s blind spots, which are located in the front and on either side of the truck. It’s important to avoid lingering in these blind spots for too long, as the truck driver may not be able to see you.

When passing a truck, it’s important to accelerate quickly, pass as quickly as possible, and then slow down to avoid cutting off the truck. You should also avoid passing a truck on a hill or a curve, as the truck may be unable to gain enough speed to overtake you.

When merging with a truck, it’s important to signal your intentions early and make sure the truck driver can see you. You should also accelerate quickly to avoid the truck and move into the lane as soon as possible.

When approaching a truck, you should also be aware of its speed and keep a safe distance. Trucks need more space to stop than cars, so it’s important to give them plenty of room. You should also never cut off a truck, as they may need to brake suddenly to avoid hitting you.

Overall, interacting with trucks can be a daunting task, especially if you’re not used to driving something much bigger than your own car. But with the right knowledge and preparation, you can safely and confidently share the road with trucks. Just remember to give them plenty of room, accelerate quickly when passing, and be aware of their blind spots. With these tips in mind, you can ensure that your interactions with trucks are safe and successful.

Interaction with Other Road Users