Fatality Rate for Collisions in Texas

The rising number of vehicles on the road today is a factor in the high number of collisions. While this is certainly a factor, the greatest fault lies with the many

drivers that refuse to obey traffic laws. Below is a table by the NHTSA (National Highway and Traffic Safety Administration). It shows the 2006 Fatality Rates for Texas and the U.S. in general. 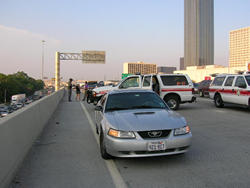 What were these 3,475 people doing when they were killed?

1,875 were driving a vehicle
821 were passengers in a vehicle
346 were riding motorcycles
379 were pedestrians
51 were pedicyclists
33 were doing other things or it isn’t known what they were doing

Of these 3,475 fatalities, 1,474 people died because unsafe speed and 1,677 because alcohol contributed to the crashes.